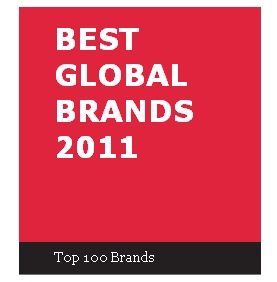 Interbrand has released its report on the Best Global Brands of 2011 and tech companies are responsible for the majority of brands in the top ten.   The best brand for 2011 in terms of value is still Coca-Cola with $71.8 billion but the second, third and fourth best brands are owned by tech companies.  There are a total of six tech companies in the top ten and these are IBM, Microsoft, Google, Intel, Apple and HP.

Apple saw the biggest growth among the companies in the top 100 at 58% and now has an estimated value of $33.49 billion.  It’s also the second company with the biggest jump in rankings, leaping from number 17 in 2010 to number 8 in 2011.  Amazon also saw an increase in ranking, so did Google and Samsung.

Here is the list of top 100 best global brands in 2011 according to Interbrand.