After the HTC One X and HTC One S comes the HTC Desire C handset.  The Desire C’s name does not indicate that it’s a part of the HTC One family but its design is closer to the One series than the Desire lineage.  The HTC Desire C boasts of a durable metal frame with precision engineering and features a micro-drilled earpiece for sharp in-call sound, hyper-viewing angle display and metal camera bezel.

The HTC Desire C resembles the HTC Explorer but the similarity stops at the design as the Desire C is a much better handset.  For starters, the HTC Desire C runs Android 4.0 Ice Cream Sandwich out of the box with Sense 4.0 skin on top.  There’s also a Beats Audio feature but this one is more like a gimmick to me than a real standout feature.  Still, the HTC Desire C is an able handset and the inclusion of Beats doesn’t really hurt.

You may call the HTC Desire C a budget HTC One device because even though it resembles an HTC One phone, its specs clearly make it a budget phone.  The Desire C features a 3.5-inch display, a Qualcomm Snapdragon S1 chipset clocked at 600MHz, a 5MP camera with F/2.8 aperture and 34mm focal length, 4GB of built-in storage (plus 25GB cloud space from Dropbox for 2 years), a microSD card slot, 3G conmection with 7.2Mbps HSDPA, Bluetooth 4.0, Wi-Fi and USB 2.0.  The battery has 1230mAh capacity.   There is also an NFC variant of the HTC Desire C in some countries. 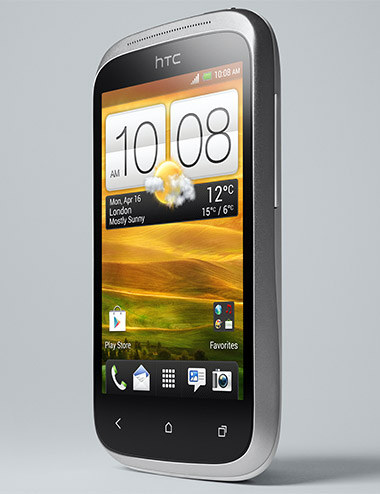 The HTC Desire C will be available in Polar White, Stealth Black and Flamenco Red and will launch later this month. The price has not been announced yet but rumors say it will be within the 200 Euros (Php11,000) range.