The recent Cherry Mobile launch revealed the Fusion BOLT tablet that features a 7-inch HD IPS display and packs a 1GHz quad-core processor.   The display has a Super HD 2160P video support, which only means it can play videos at this resolution.  The actual resolution of the Fusion Bolt is 1280×800, which is actually the same resolution as the display on the Galaxy Nexus 7.   And also like the tablet from Google, the display is IPS, which means it will have good viewing angles even in direct sunlight.   This remains to be seen in actual use and hopefully I’ll get to review one soon. 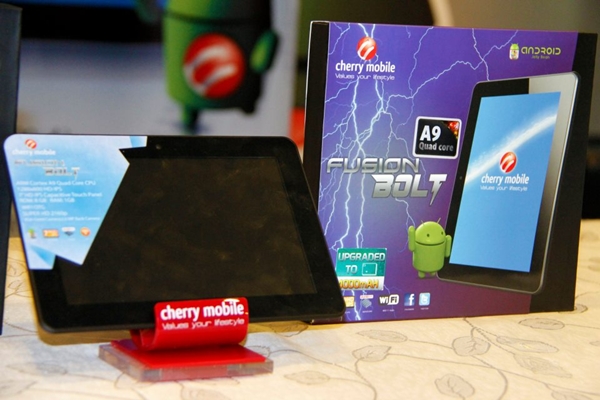 The quad-core CPU of the Cherry Mobile Fusion Bolt is boosted by 1GB of RAM.  This is good enough for intense gaming and multi-tasking, but this also remains to be seen.  Battery is also surprisingly good at 4000mAh but with a Super HD screen and a quad-core CPU, expect the power to get drained easily.  The Cherry Mobile Fusion Bolt has a 2-megapixel rear camera, good enough considering that the Nexus 7 only has a 1.2-megapixel front-facing camera.  The Fusion Bolt even has a front-facing camera, albeit it’s only of the VGA variety (0.3-megapixels).  For internal storage, the Fusion Bolt has 8GB total capacity.  That’s where Cherry Mobile made a compromise. Thankfully, this is expandable via microSD slot up to 32GB.  The tablet runs Android 4.1 Jelly Bean, in case you want to know the OS running on the tablet.

From the looks department, the Cherry Mobile Fusion Bolt is also promising.  If you’ve seen the Ainol Novo 7 Venus tablet before, you’d more or less know how the Fusion Bolt looks.  It is slim enough, with a back that’s textured for a nice grip.  For the price of P3,999, I honestly believe that Cherry Mobile has another winner here.  The Fusion Bolt is so far from the first Superion tablet from Cherry Mobile so there’s no doubt that the company has come a long way.  This new tablet is meant to blow other 7-inch tablets out of the water, if not by its specs, certainly by its price.  A quad-core tablet for P3,999 is definitely a steal.  Hopefully the device does not come with hardware or software issues.

The Cherry Mobile Fusion Bolt will be available in March.  Are you going to buy one when it becomes available in the market?