There is a long-running debate about whether a PC is better than a Mac or vice-versa. Even so, it’s pretty much a certainty that even the most ardent PC fan secretly craves to own a Macbook – and it’s not hard to see why.

Apple excels at making products which are considered ‘cool’. The technology is designed to be stylish as well as efficient. And because the company designs the software as well as the hardware, the products integrate seamlessly with each other offering a complete technology solution from home to office and beyond.

Whenever a new product is launched by Apple, whether it happens to be a new generation of iPhone or a development such as the Retina Display which is currently available across a range of products, there will be queues forming outside shops before the launch. This creates a further surge of people hoping to sell their old Macbook Pro models in order to fund their upgrades.

There are two Macbooks currently in production although it is possible to source others thanks to their longevity and the buoyant second-hand market.

Most people who owned the previous Macbook Pro thought it couldn’t be bettered – and then Apple developed the Retina Display. Available in two screen sizes – 15 inch and 13 inch – they have five million and four million pixels respectively, meaning they provide unrivalled clarity and detail.

The Macbook Pro Retina Display is the thinnest and lightest notebook currently available thanks to some ingenious creative breakthroughs. Apple has dispensed with the noisy and bulky hard drive altogether, relying instead on flash architecture for storage. Taking up just ten per cent of the space required by a hard drive, this makes for an impressively sleek and dynamic machine.

The Macbook Air has been around since 2008 and has won countless fans for its lightness and extreme portability. The iconic unibody aluminium frame weighs less that 2 ½ pounds and is slightly tapered giving it a design boost as well as providing the perfect angle for using the keyboard.

The current 2013 model of the Macbook Air boasts an incredible battery performance, offering up to 9 hours of use. The battery even allows up to 8 hours of video display from a single charge. This latest model also benefits from a dual microphone system providing greater clarity, which can make a big difference for anyone using VOIP. 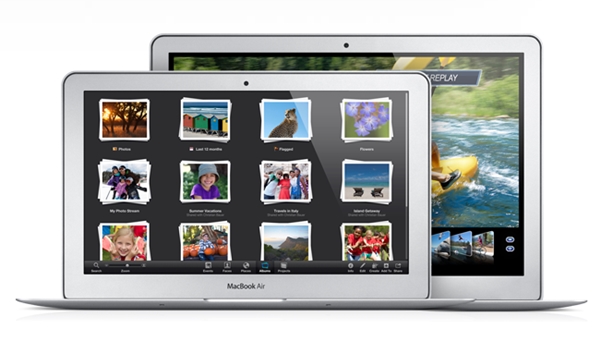 The latest operating system is OS X Mountain Lion which allows your new Macbook to communicate with your other Apple technology. Update a contact on your Macbook Pro Retina Display and next time you check your iPhone your contact will be there too. It’s all thanks to the iCloud which allows you to store all your data in one place. Your devices will even update themselves while they’re in sleep mode, saving you the arduous task of scheduling synchronisations between your gadgets.