Flexible displays are expected to be popular considering how useful it will be in mobile devices like smart watches where curved displays are essential to the function.  On smartphones, though, I am one of those who find curved displays unnatural.  Samsung was the first to come up with a curved display device with the launch of the Samsung Galaxy Round just a few days ago.  The Samsung version curves from side to side and it offers features that make use of its curved design.  LG has been vocal in its plans to release devices using its own curved displays.  Purported press renders of an LG device called G Flex has surfaced online and although it looks sleek, I still doubt of it will be easily adopted by the masses.

In any case, the LG G Flex is rumored to have a 6-inch OLED display.  This particular display was revealed by LG days ago and it is said to be the world’s slimmest at 0.44mm, as well as the world’s lightest at 7.2 grams (0.25 oz).

Here are some photos of the LG G Flex.

The LG G Flex has a curved display alright, but it curves the other direction.  While the Samsung Galaxy Round curves from side to side, the G Flex curves from top to bottom.  If you really think about it, both devices have advantages. The Galaxy Round is comfortable to put in your pocket since its curved surface will follow the shape of your leg.  The shape of the LG G Flex, on the other hand, will be a problem with pockets but will be more comfortable in making calls as it hugs your face more naturally.

At the end of the day, the features of these phones will determine which one is better.  Samsung offers software enhancements that make use of the Galaxy Round’s curved display.  LG will surely come up with gimmicks of its own.  As for me, I’ll stick with flat phones. 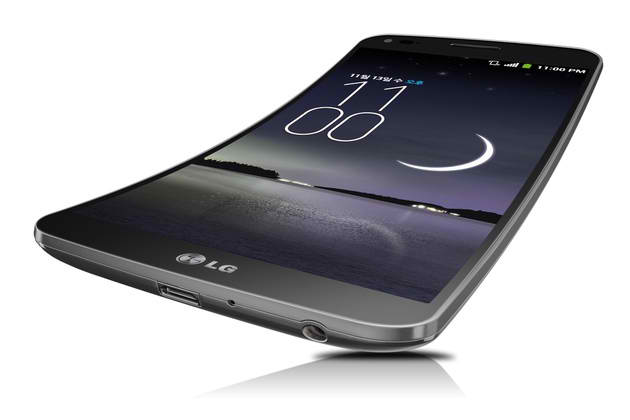