LG just announced a “lighter” version of its Optimus G Pro handset called, well, LG G Pro Lite.  The name Optimus has been dropped from recent handsets from LG and although it makes the names of its handsets shorter, they somehow lost the identity and name recall the Optimus brand has somehow created.  One-letter names are quite hard to truly distinguish a product but that’s LG. Whatever reasons the company has for using one-letter names despite the fact that its house brand is the two-letter name is beyond us consumers. So let’s just take LG G Pro Lite as a new product name. 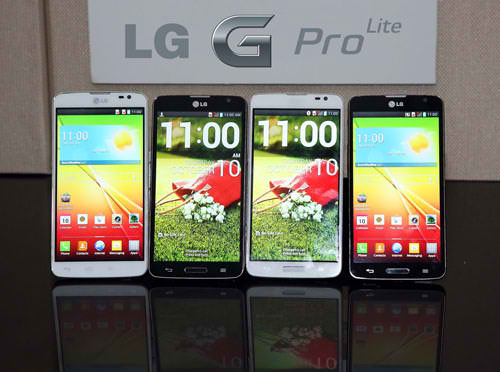 The LG G Pro Lite sounds like a device that would pack hardware specs that are closer to LG’s flagship devices but the sad thing is, the LG G Pro Lite is just a mid-range device with mediocre specs.  It has a 5.5-inch IPS display with a measly 960 x 540 resolution, a relatively slow dual-core 1GHz Mediatek processor (MT6577), 1GB of RAM, 8GB of on-board storage, 8-megapixel main camera (BSI sensor) and 2-megapixel front-facer.  LG equipped the LG G Pro Lite with a stylus just like the LG Vu 3 so this device is clearly a Samsung Galaxy Note 3 wannabe but is clearly behind in specs and features.  Rounding out the specs for the LG G Pro Lite are dual SIM support, 3,140mAh battery and connectivity options that include 3G HSPA, Bluetooth 3.0 and WiFi.