Here’s another leak of the Huawei P20 Pro. This time, we get a glimpse of how the triple cameras would look like, plus a view of that smallish display notch. The tag line See mooore with AI is also highlighted.

Looking at the image, you can see that the third sensor is separated from the two. We’ll find out why when the phone launches. Also of note is the matte metallic blue color that was also seen on the Huawei Nova 2i.

Out of the three phones that will launch on March 27, the Huawei P20 Pro is rumored to be the only one to have a triple camera system. The P20 and the P20 Lite will both get dual cameras. All will be Leica branded, as far as we know. 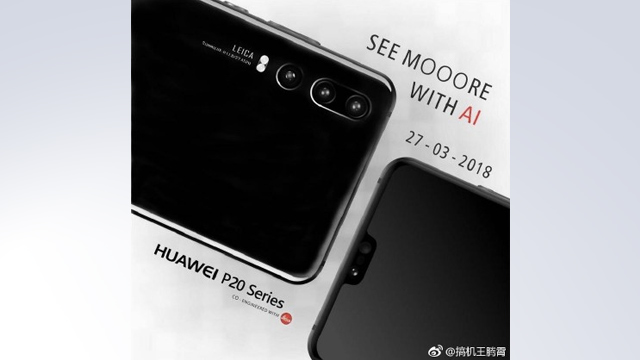 The Huawei P-series will make its debut on March 27, 2018 in Paris, France. We’ll know if any or all of these are true when they launch the phones. Stay tuned and we’ll keep updated.