The Nokia E7 is the Finnish company’s flagship phone.  It’s not surprising, therefore, that the Nokia E7 sports impressive specs and features.  But does it have what it takes to compete with Apple’s iPhone and the current crop of Android phones?

The Nokia E7 takes some design elements from its N8 sibling.  From afar the Nokia E7 could be easily mistaken as a Nokia N8 but in truth the E7 is substantially bigger.  The body of the Nokia E7 is composed of aluminium material that houses an AMOLED 4-inch screen.   On the back is the 8 megapixel camera and dual-LED flash.   On the ends of the device are the antennas and connectors.

The Nokia E7 feels like a premium product when you hold it. There is no doubt that Nokia put a lot of thought into the design details. The finish is superb and the materials are high quality. 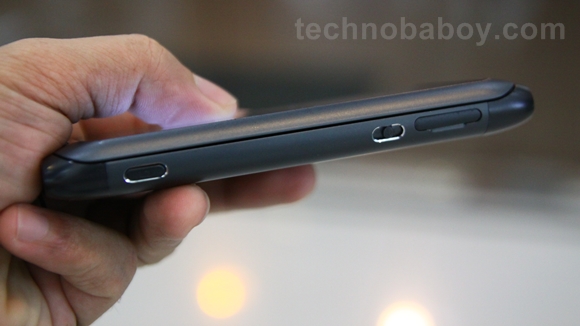 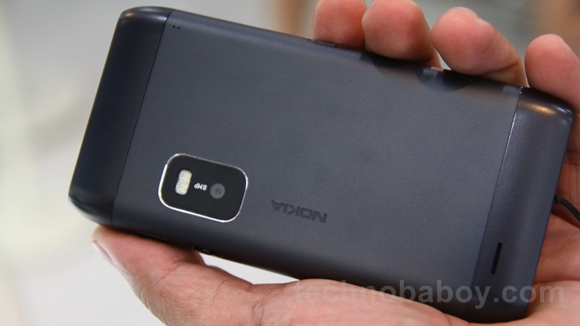 Being essentially a Communicator phone, the Nokia E7 features a slide-out QWERTY keyboard.  The E7 is practically as thin as the N8 but Nokia was able to incorporate the keyboard somehow.  The upper part of the device is all display while the lower part contains the keyboard and the rest of the phone.

The top part of the phone houses the 3.5 mm headphone jack, the power button, a mini-HDMI port, and a micro-USB connector.  At the bottom are the microphone and the phone’s speaker.  On the right side of the E7 are the SIM tray, the volume control slider, and the camera shutter button. 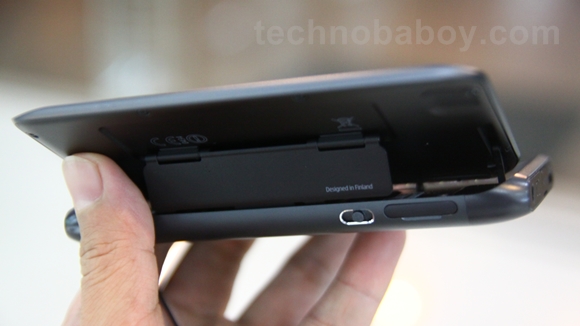 The slide-out mechanism implemented by Nokia is quite impressive but the display is rather hard to push.  The display tilts at about a 45 degree angle which is useful when watching movies or playing games.   Typing is also an absolute pleasure with the display tilted at this angle. The keyboard on the Nokia E7 is one of its best features.  Nokia has obviously learned from mistakes in the past and has produced one of the best keyboards on a portable device.  The keys on the Nokia E7 are rubberized and they give great tactile feedback.  They are well spaced and well placed, which all make for a pleasurable typing experience. 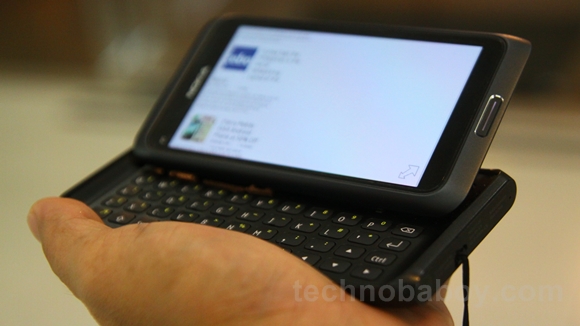 The Nokia E7’s 4-inch AMOLED screen is also one of its best features.  The “ClearBlack” screen is very bright and produces excellent colors and contrast.  You can even view the screen at angles.   The screen is protected by Gorilla Glass so it is expected to withstand heavy use.

At a time when 1Ghz processors are a standard and dual-core processors are slowly becoming common, the 680 MHz ARM 11 CPU of the Nokia E7 is quite a disappointment.  What also disappoints is the lack of a MicroSD card slot for additional mass storage. The 16GB internal storage may be enough to some users but others will feel the need for bigger memory.  The E7 however features USB On-The-Go, which allows the device to host USB devices like flash drives, hard drives, keyboards, and accessories.

The 8-megapixel camera on the Nokia E7 takes very good photos.  It includes dual LED flash, virtual zoom and face recognition.  The photos are sharp and colors look accurate. The 720p HD video is also sharp on this device.

The hardware and specs of the Nokia E7 are impressive, but what kills it is the Symbian^3 operating system.  Compared to older versions of Nokia’s OS, Symbian^3 shows a lot of improvements but if you are an iPhone or an Android user, you will immediately notice that the Symbian OS is lagging behind in a lot of things.  Symbian simply feels unpolished compared to the other two. 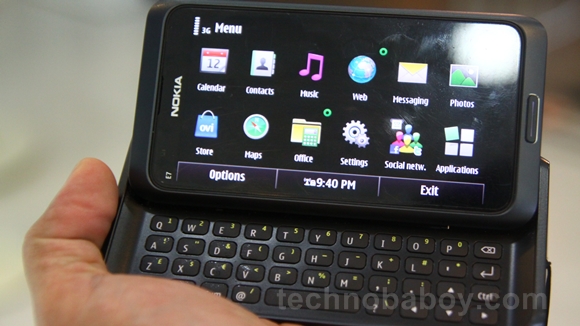 Navigation on the E7 is not as smooth as the iOS or the Android, and the interface is not as intuitive.  Switching apps and navigating the OS is actually complicated.  At times I was lost in the maze of buttons and actually felt like I need an instructional video before I can use the E7.  It also needs to be mentioned here that although Nokia has an Ovi Store with lots of apps, it does not compare with Apple’s App Store and Google’s Android Market in terms of available apps.

What I certainly hate about the Nokia E7 is the browser.  Not only did it feel slow.  It felt like a half-baked app compared to the browsers of other platforms.  I was surprised to find out that the web pages were poorly rendered and were not properly resized.  The texts on pages are also blurred out specially when zoomed out.  They only start becoming readable when you zoom in. 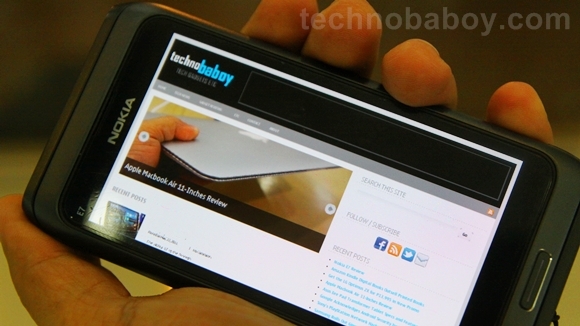 You’ll be glad to know though that the Nokia E7 has a lot of helpful and useful tools.  It is preloaded with Mail for Exchange, Quickoffice, Adobe PDF reader, and Ovi Maps with free GPS navigation.

The form factor of the Nokia E7 is almost perfect.  The design is really good, and the materials used are of high quality.  The screen and keyboard are also impressive, and the camera takes good-quality photos.  What keeps the Nokia E7 from being an ideal phone is the Symbian^3 OS.

The Nokia E7 currently retails at Php32,000.   This is a quite expensive for the set of features the device is offering.