In an apparent showing of viewership strength and popularity, TV network ABS-CBN has three programs trending simultaneously on Twitter.  On August 17, 2011, Twitter’s trending topics featured three that are related to the TV network.  The topics “My Binondo Girl”, “Maria La Del Barrio” and “Alondra” trended on the micro-blogging site. 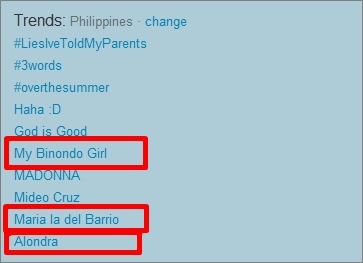 My Binondo Girl is Kim Chiu’s new show on ABS-CBN which has not even started airing yet.  Maria La Del Barrio, featuring Erich Gonzales and Enchong Dee, just started airing.  Alondra, on the other hand, is a character on Minsan Lang Kitang Iibigin.

The trends on Twitter certainly prove the popularity of the shows from ABS-CBN.  Being on Twitter almost everyday, I seldom see GMA Network shows trend on Twitter and the last I remember was related to Marian Rivera’s show Amaya.  This could mean either of two things:  ABS-CBN is indeed more popular than GMA Network Shows, or; Filipinos who have access to the internet mostly watch ABS-CBN shows, which does not necessarily mean that they are the most watched by majority of Filipinos.

In any case, the network war is a very tight contest and no TV network appears to have a consistent lead over the other.  But over social networking sites, ABS-CBN possibly leads over GMA Network by a considerable margin.