Google recently launched an augmented reality game called Ingress.  It is a game that’s played on mobile devices and would be available to users worldwide.  The game is invite-only for now and is only available on Android devices but the plan is to bring the game to more platforms.

To request an invite, you just go to the Ingress site which you can find here.  You only need to enter your email address and you then wait for your invite to arrive.  If you have the invite, you then download the Ingress app from Google Play.  I already requested for an invite and as soon as I get it, I will definitely share with you how the game goes. 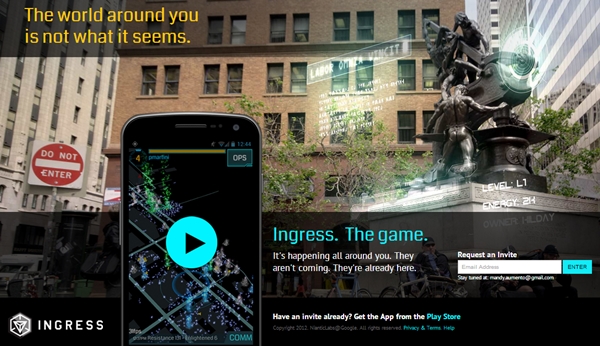 Google has not fully explained how Ingress is played but from the promo video it released, we can gather that the game involves using mobile devices to collect power from things around you or from analyzing landmarks and objects.

This world around you is not what it seems. Our future is at stake, and you must choose a side.

A mysterious energy has been unearthed by a team of scientists in Europe. The origin and purpose of this force is unknown, but some researchers believe it is influencing the way we think. We must control it or it will control us.

“The Enlightened” seek to embrace the power that this energy may bestow upon us.

“The Resistance” struggle to defend, and protect what’s left of our humanity.

From this we can gather that the game involves two groups called the Resistance and the Enlightened where one embraces the newly discovered energy and the other works to fight it and save humanity.  Players will obviously need to choose a side at the start of the game.