Wearable technology is officially the next battleground in consumer electronics.   Smart watches are slowly becoming popular but until the recent announcement by Samsung of the Galaxy Gear smart watch, the technology didn’t seem that useful or practical.  Smart watches like the Pebble or the Sony Smart Watch displayed time and a few notifications but apart from these basic functions, nothing else seemed exciting in this emerging product category. 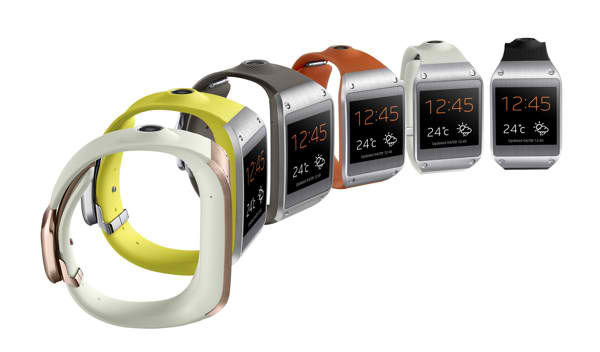 So what is the Samsung Galaxy Gear all about? What can it offer to consumers?

The Samsung Galaxy Gear was announced together with the Galaxy Note 3 and the Galaxy Note 10.1 2014 Edition.  It is packaged as a companion device, or an accessory that simply enhances a user’s mobile experience.   Its use is therefore optimized when you pair it with a device but at launch, it is only compatible with the two devices previously mentioned, although I know it will be compatible eventually with other Samsung devices.

The rumors initially reported a 3-inch display size and 4-megapixel camera.  These turned out to be wrong on a few points as the Samsung Galaxy Gear has a 1.63-inch Super AMOLED touch display with a resolution of 320 x 320 and the camera, which is located on the strap, only has a  1.9-megapixel BSI sensor.  The leaked patent application however shows a design that is identical to the final version of the Galaxy Gear.

The camera on the Galaxy Gear has autofocus and is designed to capture low-res shots and 10-second 720p videos.  The Samsung Galaxy Gear is powered by an 800MHz processor paired with 512MB of RAM.  It has 4GB of storage and packs a 315 mAh non-removable battery.  Other hardware features include two built-in mics (with noise cancellation support), a speaker, Bluetooth 4.0, accelerometer and gyroscope.

What makes the Samsung Galaxy Gear a true smartphone companion is the fact that it can take calls directly and the action only requires raising the hand to the ear, a function that is actually similar to that available on the Hot Watch.  The Samsung Galaxy Gear also has access to features like S Voice and Find My Device.  S Voice will make the Galaxy Gear a James Bond-like gadget, but it remains to be seen if voice-operated commands work on this device.

Unlike other smart watches currently available in the market, the Samsung Galaxy Gear has a lot of apps immediately available to the user.  There are 70 apps at launch, some of which are as functional as Evernote and some for health and fitness like RunKeeper and MyFitnessPal