Sony is a relatively new entrant in the phablet wars as it has only recently joined the fray.  Sony recently introduced the Xperia Z Ultra, a behemoth of a phablet, at least when compared with Samsung’s Galaxy Note.  It’s one that aims to be recognized and noticed since at 6.4 inches, it dwarfs the 5.7-inch Samsung Galaxy Note 3, or even the 6.3-inch Samsung Galaxy Mega.  Nowadays 5-inch devices are the norm so in reality the Sony Xperia Z Ultra is the true phablet.  At its size, it’s nearer to 7-inch tablets than 5-inch phones so it’s the real tablet and phone combination.

Sony is makes gorgeous devices and its Xperia line of smartphones is a testament to how good the company is in designing products.  Xperia phones are among the best-looking phones around and with the Xperia Z Ultra, Sony follows the design elements that made the Xperia Z a hit. 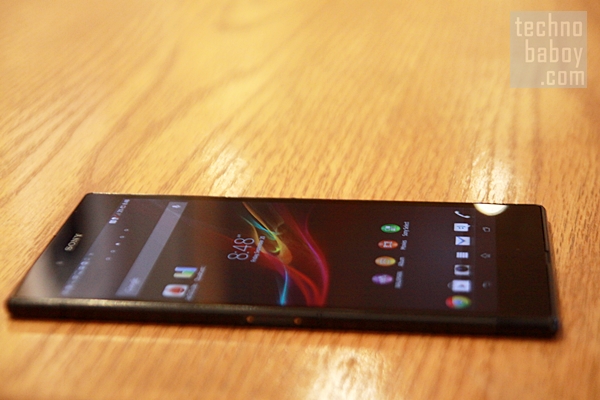 The  Sony Xperia Z Ultra is very thin for its size, coming in at only 0.26-inch thick.  It’s also very light, but it manages to feel solid and compact despite the weight.  The black version I reviewed is a lovely piece of gadgetry, with only the silver power button functioning as design highlight to an otherwise all-black enclosure. 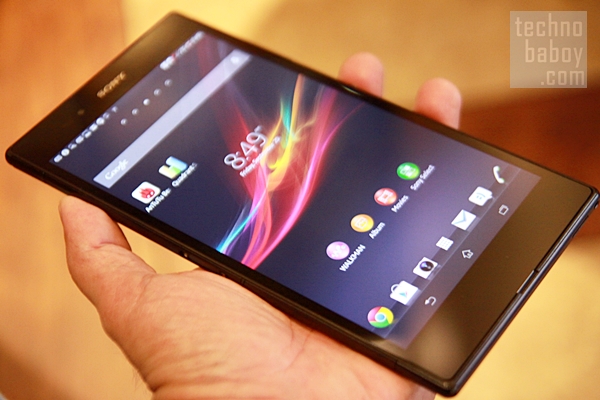 The right side is where most buttons and slots are located.  It houses the 3.5mm headphone jack, the micro-SIM tray and microSD card slot, the power button and the volume rocker.  The left side of the device has a micro-USB slot hidden in an enclosure and the dock terminals. 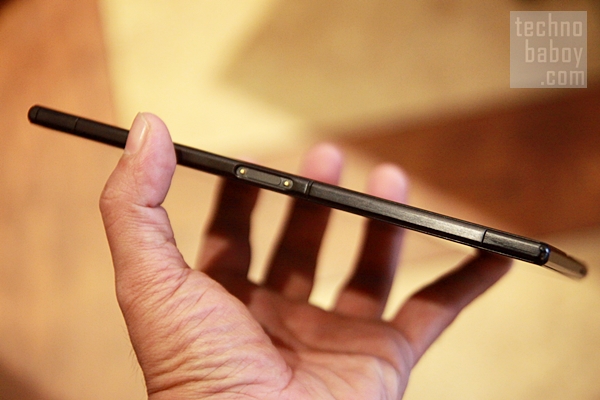 The Sony Xperia Z Ultra tries to match the top phablets in the market in terms of hardware specs.    It is powered by a 2.2 GHz quad-core Krait 400 CPU (Qualcomm Snapdragon 800 chipset) paired with 2GB of RAM and Adreno 330 GPU.  It has 16GB of internal storage, 8 MP autofocus rear camera, 2 MP front-facing camera, Wi-Fi, Bluetooth 4.0, LTE, NFC and a 3050mAh battery.   That’s a very compelling set of specs. 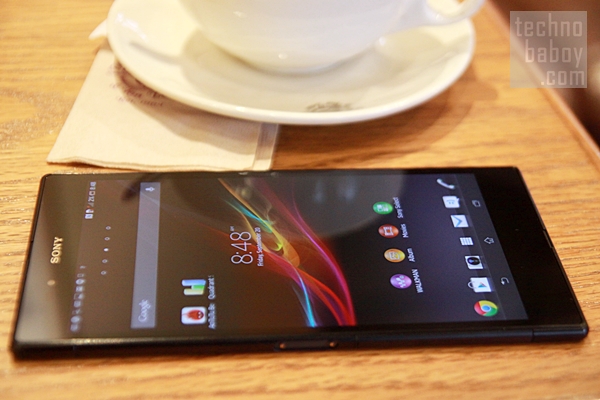 Here are the main specs of the Sony Xperia Z Ultra.

The display of the Sony Xperia Z Ultra is one of its best features.  It’s a full HD Triluminos display with 1080 x 1920 pixels resolution and 344 ppi pixel density.  Sony uses its X-Reality engine to make the display really stand out. 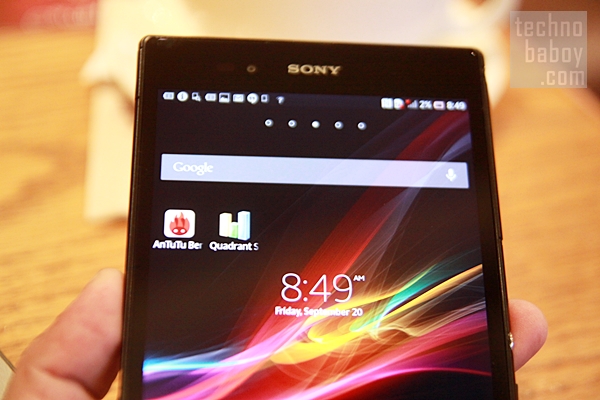 One of the good things about Sony’s Android devices is the UI.  Sony uses a polished and premium looking UI that simply looks good on its devices.  On the Sony Xperia Z Ultra, it’s a familiar look and feel, and you can’t blame Sony for not changing its UI much.  After all, it works.  Out of the box, the Sony Xperia Z Ultra runs Android 4.2.2 Jelly Bean but Sony has promised an update to Android 4.3 in the future. 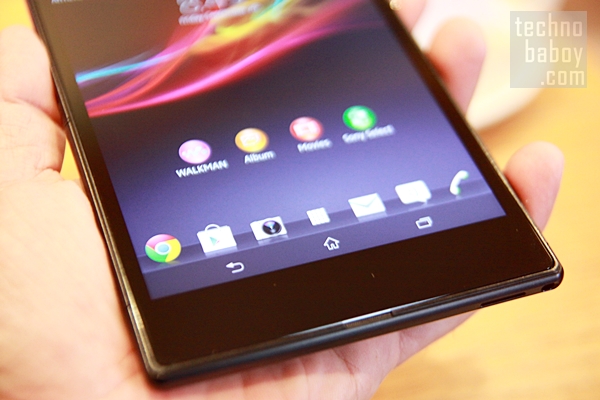 The Sony Xperia Z Ultra is fast.  It runs apps smoothly and multitasking is even great on the device.  I had no issues launching apps and running games that are hungry on CPU and memory.   Running Antutu  on the Sony Xperia Z Ultra resulted in a score of 33,878, which is considerably better than the 26,235 score I got when I ran Antutu on the Samsung Galaxy Note 3.  The Sony Xperia Z Ultra is also much faster than the HTC One and the Samsung Galaxy S4.  This is because the Snapdragon 800 chipset is one of the fastest around and the 2GB of RAM perfectly complements the setup, not to mention the Adreno 330 GPU. 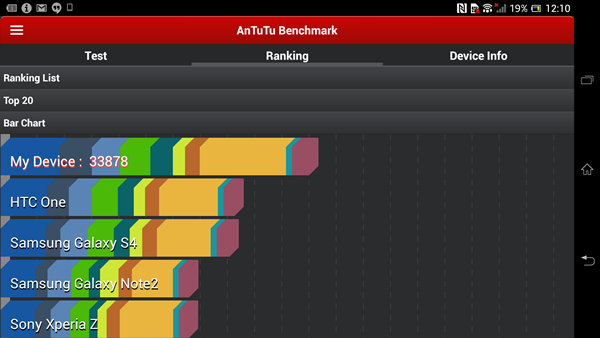 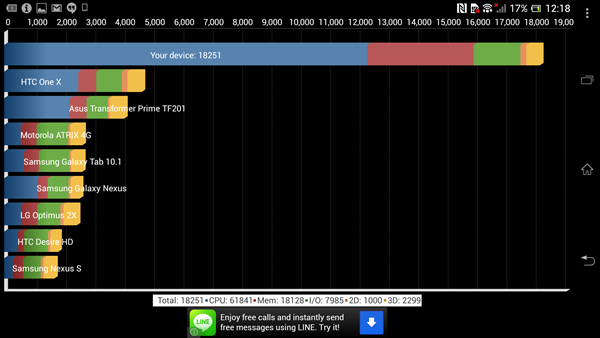 In terms of usability, the Sony Xperia Z Ultra is not for everyone.  It’s a device that you would either love or hate.  There’s no room for one to simply have a neutral opinion.  It will be loved by those who yearn for a device with a huge display and runs at top speed.  The size is sadly one that will also probably turn off buyers.  At 6.4 inches, it’s not easy to hold or to carry around.  If you plan on using this as your daily driver, you should make sure you have huge pockets or you have something to put it on, like a bag or a carrying case.  If you have no issues with its size, then the Sony Xperia Z Ultra is definitely a great device to own.   I can see users who want a compromise between a tablet and a smartphone going for the Sony Xperia Z Ultra.  It’s small for a tablet yet huge for a phone, so if you’re one who must own both and couldn’t be bothered to carry both, the Sony Xperia Z Ultra is the perfect compromise.

The Sony Xperia Z Ultra’s 3,050mAh battery is decent.  It’s not impressive but it’s able to turnover a battery life that averages around 14 hours on normal use.  I expected something longer considering the battery size but sadly, I could only squeeze 14 hours of use on the average.  It can get longer if you implement battery saving measures, or could go way shorter if you are a heavy internet user or a heavy gamer, or one who simply puts the display on its brightest setting.  I was able to squeeze out more battery juice on the Samsung Galaxy Note 3, which is really expected since it has a smaller display. 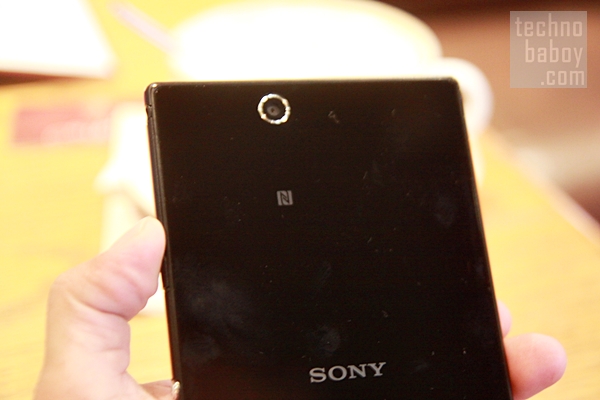 The Sony Xperia Z Ultra’s camera software is a familiar one if you have used an Xperia device before.  It has settings for burst shots, HDR, Panorama white balance, exposure, metering, image stabilizer, ISO and a selection of picture effects and scene presets.  The UI feels like you are using a point and shoot camera with the richness of options. 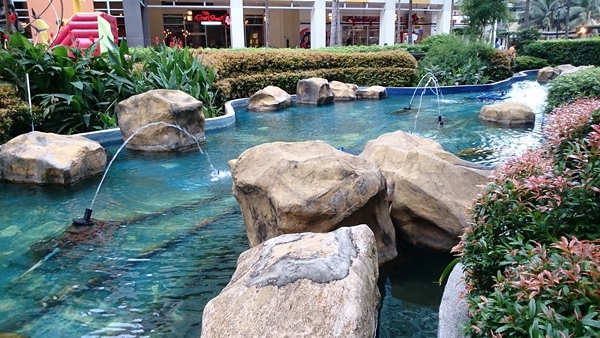 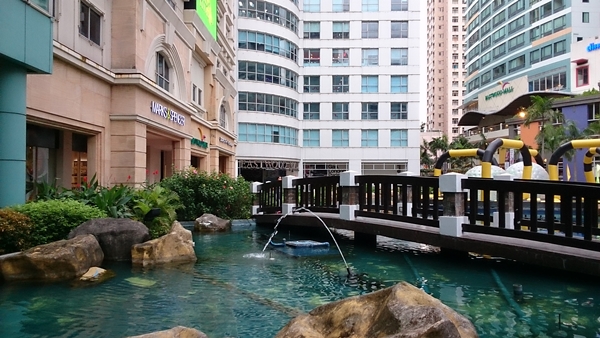 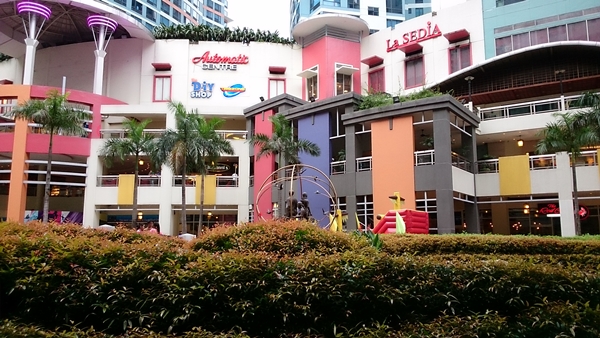 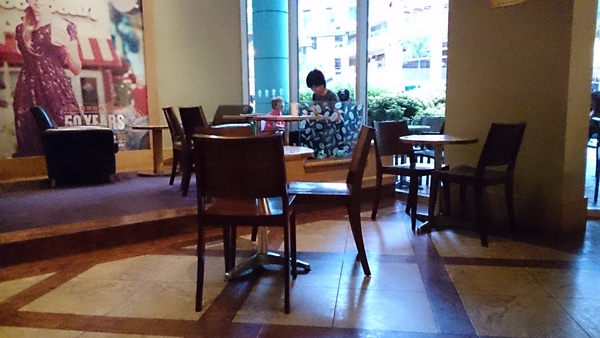 The Sony Xperia Z Ultra is a beast of a device.  At 6.4 inches, it is practically a tablet more than a smartphone.  If this size is just what you need in a device, then the Sony Xperia Z Ultra is a great purchase.  It has a gorgeous design and an impressive build quality that is the hallmark of Sony products.  The size of the display is an advantage especially for those who browse the internet a lot or those who spend a lot of time watching videos or playing games.

In terms of performance, the Sony Xperia Z Ultra is one of the fastest devices around.  It blew away most of the competition in benchmark tests and this speed shows in actual use.  Apps load almost instantaneously and games are handled easily, even the graphics intensive ones.

The Sony Xperia Z Ultra is not perfect, though.  It has not flash and the camera is not so good in low light settings.  The battery life is also not that good although it is decent enough for daily use.  The Sony Xperia Z Ultra is not for everyone.  It is a great device but when the size is considered, some users would think twice before considering this phablet.  If you know what you’re getting into, then this is one of the best devices you can buy right now.