Cherry Mobile recently revealed the Flare 2.0 Android smartphone.  It’s the follow up to the original Flare, with an updated quad-core processor and a slightly different design.  The Flare 2.0 now runs Android Jelly Bean but the issue is the RAM capacity which is unfortunately still at 512MB.

Very recently, Cherry Mobile confirmed the availability of the Flare 2X.  This is another updated to the original Flare but it now packs 1GB of RAM, an 8MP rear camera, and it has a very distinct design.  If you like shiny devices, the Flare 2X is for you.  Otherwise, you will hate it for being too shiny as it is a definite fingerprint and smudge magnet. 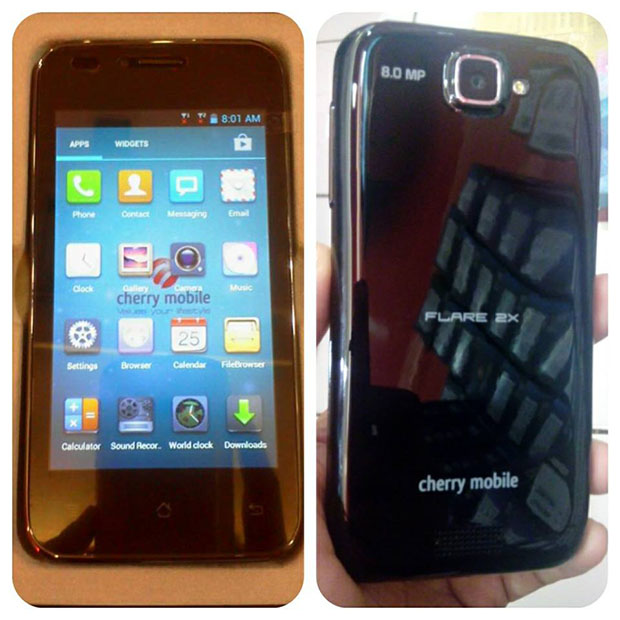 The price is surprisingly still affordable as the Cherry Mobile Flare 2X packs a retail price of only P4,499, or just P500 more expensive than the Flare 2.0.  With the improvements in specs, the Flare 2X looks like the easier choice compared to the Flare 2.0.  The RAM capacity and the camera should be worth the additional P500 you will be paying.  Then again, if you are particular with the design, you may be turned off with the design of the Flare 2X.

Here are the main specs of the Cherry Mobile 2X.

As you will notice, most of the specs of the Flare 2.0 have been retained, expect for the aforementioned improvements on RAM and camera.   The 4GB internal storage could still be an issue for users but at least it can be expanded via microSD slot.  The battery is still at 1,550mAh, which could prove to be limited if you are a heavy smartphone user.  Reviews will surely be available soon so make sure you read them before you purchase one.  And choose wisely between the Flare 2.0 and the Flare 2X.  If you really need to choose between the two, I think the Flare 2X is the better choice.