Smartphone manufacturers are in a tight race for building the biggest and best devices for consumers.  Samsung has proven that there is a huge market for huge display devices and the norm nowadays seem to be devices with displays ranging from 4.7 inches to anywhere near 6 inches.   In the fray, manufacturers thankfully still have time to step back and make devices that belong to the mid-range market, and probably ideal for those who are not necessarily trying to get the biggest displays.  Manufacturers have built “mini” versions of their flagship devices.  Samsung made the Galaxy S4 Mini and HTC also came up with the One Mini.  These are supposed to be smaller versions of the flagship but in reality, they are not the same as their bigger counterparts in terms of hardware specs.

The HTC One is one of the best-made and best looking phones in the market.  If there is an Android counterpart for the iPhone in terms of design and construction, the HTC One should be it.  It is therefore great that HTC brought the design of the HTC One to the HTC One Mini, even though there are minor differences. 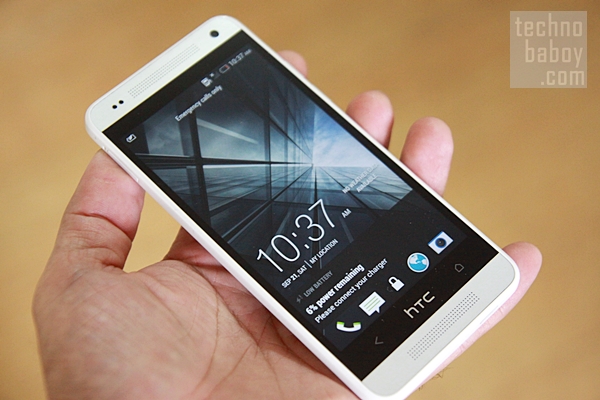 The HTC One has a lot of fans so it won’t be a surprise if the HTC One Mini also gets a lot of admirers.  The HTC One mini features an aluminum unibody enclosure similar to its bigger brother.  Instead of featuring aluminum all over, the HTC One mini has glossy plastic trimmings which actually look good and contributes to the overall appeal of the phone. 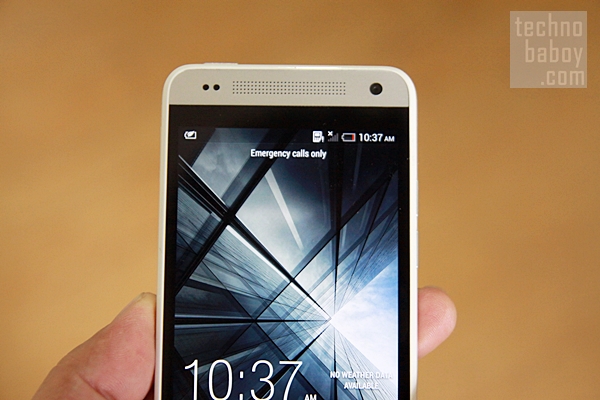 The front part features the BookmSound speakers located on top and at the bottom.  A quick check of slots and buttons will reveal a power button and 3.5mm headphone jack on top, volume toggle on the right, a micro USB slot at the bottom and a micro SIM card tray on the left. 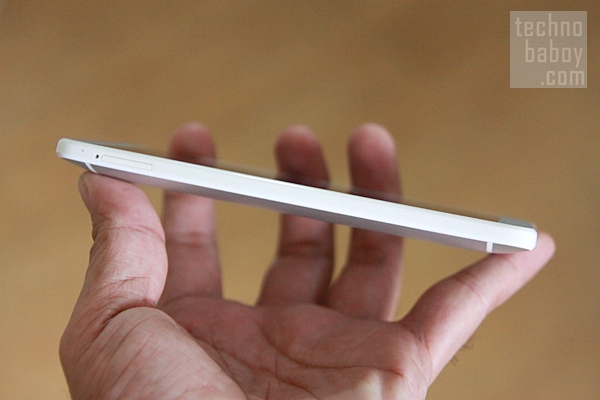 The back features a silver finish and shows the camera lens and flash on top and the HTC logo in the center.  There’s also Beats Audio written near the bottom. 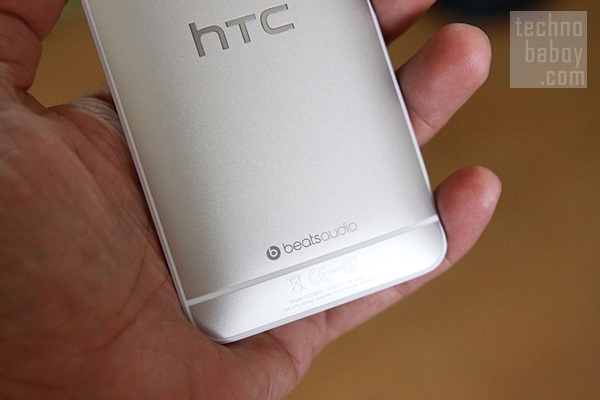 The HTC One mini is slim and the fact that it is rather narrow makes the thinness obvious.  It’s slightly curved in the back which also makes the phone easy to hold and grip.  It has a nice feel when held in the hand, and although it’s light enough, it has a bit of a heft that still makes you feel you are holding something compact. 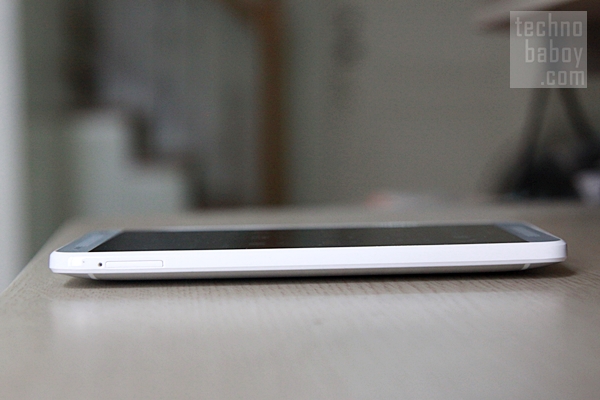 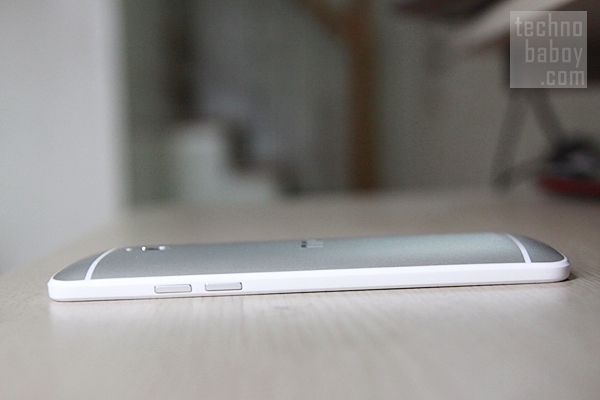 Overall, I like the design of the HTC One mini, except only for the size of the bezels on top and at the bottom.  I just feel like the bezels could have been made thinner, but the main thing to blame for the thick bezels are the BoomSound speakers.

HTC One Mini – Hardware and Display 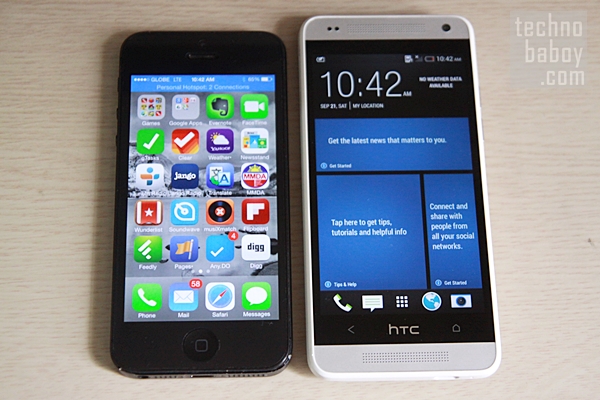 The display on the HTC One mini is one of its best features.  The 4.3-inch 1280×720 Super LCD3 display is really impressive it has got to be the best display I’ve seen in a 4.3-inch size.   It renders colors perfectly, making photos and videos look closer to reality.  This is way better compared to Super AMOLED displays which oversaturate colors and hues.  The display is crisp and sharp, making gaming and video playback simply great on this phone.

The HTC One mini’s 1.4 GHz dual-core processor and 1GB of RAM combo delivers above average performance.  It does not perform like a beast and cannot be mentioned in the same breath as the Galaxy S4 or the Galaxy Note 3 and especially the Sony Xperia Z Ultra.  It’s rather obvious from the phone’s specs.  However, I was still happily surprised that the HTC One mini was able to handle apps and games with ease.  Even the graphics hungry games played well on the HTC One.  Admittedly, though, the HTC One delivered a smoother and quicker overall performance but the difference is not that noticeable.

Benchmark tests are good, but not industry leading by any degree.  AnTuTu benchmark test came with a score of 14,898, which is a shy lower than the score for the HTC One X.  The HTC One Mini got lower score compared to the Google Nexus 4 and even the Samsung Galaxy S3. 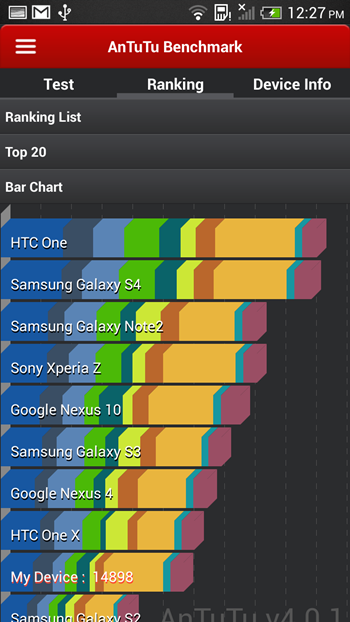 Quadrant test on the other hand resulted in a score of 4,613, again, making the HTC One X slightly better. 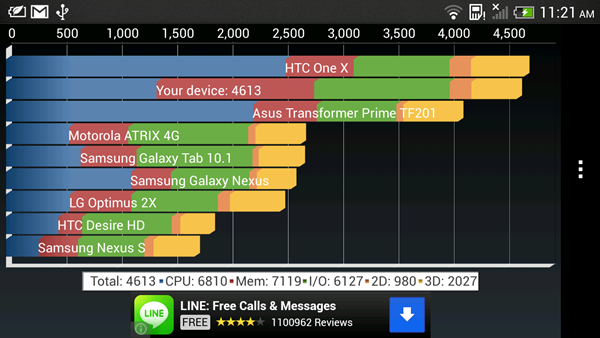 Benchmark results don’t lie.  The HTC One mini is not the best or the fastest but I don’t think it is trying to be.  In the end it is still a mid-range phone with mid-tier specs.  But in actual use, the HTC One mini performed well.

In terms of battery life, the 1800mAh battery on the HTC One mini gave a satisfactory performance.  Under normal use, with Wi-Fi turned on once in a while and games and videos played casually, the HTC One mini delivered about 12-14 hours battery life.  This is more than decent by current standards and should make users satisfied.  Using battery saving tricks should make the phone last longer while using it extensively is bound to shorten the battery life.

The HTC One mini runs Android 4.2.2 with Sense 5 on top.   Sense 5 is a heavy skin that makes your Android experience quite different from stock.   HTC use a lot of enhancement and software tricks that could either impress or turn off users.  Sense 5 is not easy to understand at first but in time, it becomes actually nice to use.  It’s smooth overall, but the main highlights of Sense 5 are BlinkFeed, a news and social media aggregator with a Flipbboard inspired look and feel.  It occupies the home screen and it’s actually useful if you want to get news and social media updates fast.  One of the nifty features of Sense 5 is Video Highlights.  It is a trick that the phone does with photos you’ve taken, weaving them into 30 second video clips laden with effects.   There are 12 preset themes to choose from and music can also be added. 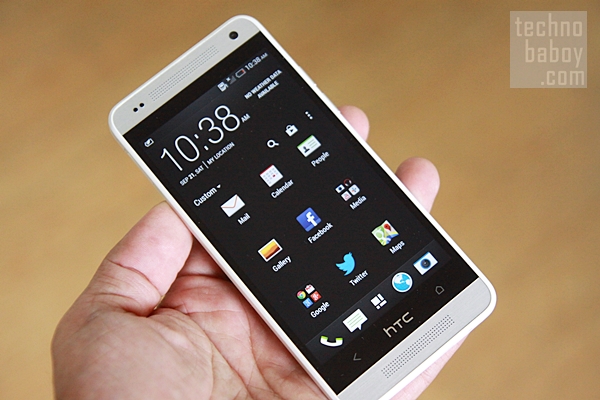 The HTC One mini runs Android and Sense 5 quite smoothly.  There are rarely hiccups, an indication that Sense has matured as a UI enhancement and has been polished by HTC to near perfection.  If there are improvements that need to be made, it’s not in performance but in design and appearance.

The HTC One mini features Ultrapixel technology which HTC introduced in the HTC One.  The phone uses a 4-megapixel sensor but it features larger ultrapixels which means it is great with low light shots.  The drawback to this is that there are smaller details captured since in essence, the sensor is only 4 megapixels.  Photos are therefore not meant for cropping since they are smaller. 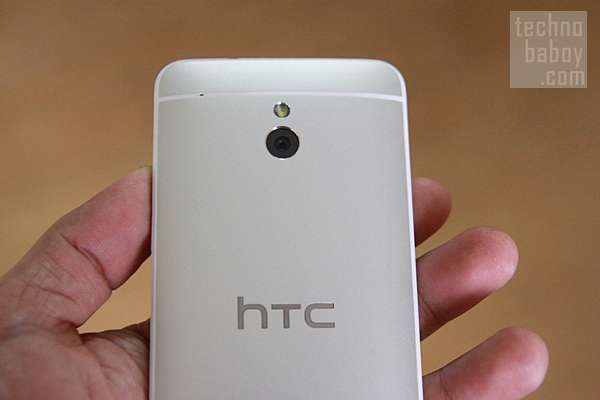 If you are only using photos for social media, the HTC One mini’s camera is more than sufficient.  Photos taken with the HTC One mini actually have good picture quality.  Colors are accurate and details are sufficiently rich.

Here are sample photos taken with the HTC One mini.

One of the great features of the HTC One mini is BoomSound with Beats Audio.  The dual front speakers are enhanced with mini amplifier, resulting in a sound that’s rich and dynamic.  Most phones have single mono speakers located at the back while the HTC One mini’s stereo speakers are conveniently located in front.   In actual use, you really hear the difference.  Playing tracks and watching video on the HTC one mini is a delightful experience with BoomSound.  The speakers are powerful enough and are detailed enough you’d beg for the same setup if you are using a different phone.  Sound quality on the HTC One mini is much better compared to what the iPhone 5 produces.

The HTC One mini is one of the best mid-range phones in the market right now.  It features the same great body and finish of the HTC One, and it also features BoomSound ad the same Ultrapixel technology seen on the bigger flagship device.  There are compromises in hardware features but the effect is not significant reduction in performance.  The HTC One mini is still able to deliver fast and smooth performance with apps and even with graphics intensive games.   The HTC One mini also has a great display that is arguably one of the best you’ll see on a 4.3-inch device.

If there are limitations to the HTC One mini, it is on the non0expandable 16GB internal storage, or the low megapixel camera.  But even the photos look great despite the 4-megapixel sensor.