For a long time, tablets were hailed as viable replacement for laptops. The closest alternative would be the iPad Pro with its powerful internals and productivity focused features. Problem with that is the price.

For Android users, Huawei recently launched a new option in the Matepad Pro. The tablet comes close with its own set of premium features, including a powerful Kirin 990 processor, a large battery, and EMUI 10.1.

Is the Huawei Matepad Pro a good alternative to your laptop? Lets find out.

The Matepad Pro is designed around the gorgeous 10.8-inch OLED display with a 16:10 aspect ratio. Despite the screen size, Huawei managed to keep a compact profile with thin 4.9mm bezels and a 90% screen-to-body ratio.

Huawei was able to achieve such an impressive screen-to-body ratio by going with a punch-hole cutout for the selfie camera. It is placed on the left corner, which surprisingly does not distract from whatever it is your doing.

The OLED display has a 2K resolution and a DCI-P3 cinematic level color gamut. It is plenty sharp, bright and vibrant. And Together with the Harman-Kardon tuned quad speakers (that gets really loud by the way), it is the perfect device for playing games, and watching movies and videos.

Also Read: HERE WeGo is the Google Maps alternative for your Huawei and Honor phones

For a device meant to be used in landscape orientation, the placement of the buttons are not as convenient as I would have liked. The power button on the left side is okay, but reaching for the volume rockers on the top left takes some getting used to. On portrait mode, having the buttons on one corner makes it easier.

The tablet doesn’t have a fingerprint scanner, relying instead on facial recognition for fast unlocking and easy access. Also missing is the headphone jack, which I don’t mind losing on a tablet.

The Matepad Pro has an aluminum shell coated with a glass fiber material. The coating has a matte texture, which gives it a non-slippery feel. It also provides resistance to minor scuffs and fingerprints.

The Matepad Pro comes with a Kirin 990 4G processor, 6GB LPDDR4x RAM and 128GB UFS 3.1 storage. We all know what the chipset is capable of on the Mate 30 series.

In real world usage, it is more than adequate for all applications, including 3D games. During my time with it, I played Call of Duty Mobile on the tablet with full graphics and max frame rate. I have never encountered any problems or hiccups while playing. 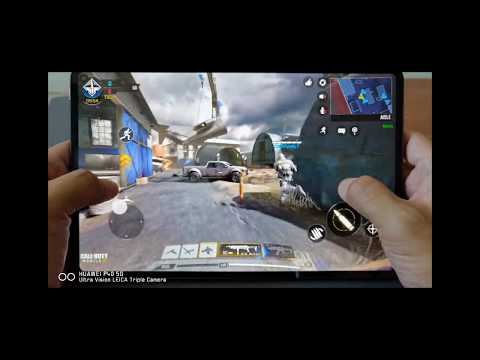 The tablet runs on EMUI 10.1, Huawei’s proprietary OS based on Android 10. It does not come with Google apps. What it has is the AppGallery, Huawei’s official app distribution platform or app store.

The AppGallery is still growing, but it already has a large library of apps, with many of the essential and popular ones such as TikTok, Snapchat, Viber, WeChat, Lazada, Shopee, Viu, PayMaya, and GCash, It also includes many local banking apps such as BDO, Metrobank, RCBC, Eastwest Bank, and Union Bank.

Check out our AppGallery guide to find out what else you can do with Huawei smartphones and tablets running EMUI, including instructions on using your favorite Google products.

The Matepad Pro has an 8MP front facing camera for video calls. It also has a 13MP camera at the back, in case you’re the type who takes photos with the tablet.

An all around productivity device

As laptop alternative, the Matepad Pro is not short on features for productivity. My favorite feature of EMUI 10.1 is the split screen mode.

Split screen mode lets you run two apps on the display side by side (three, if you don’t mind one floating on a smartphone sized window). So, I have have Word on the left side and the browser on the right. I usually run Spotify (or the calculator) as a third app on the floating window.

To do this, just swipe from either side of the display and hold for a second to pull out the multi app panel and choose the app you want to run.

The tablet also comes with Microsoft’s Office app (if not, you can get it in the AppGallery). The app allows you to create and edit Word, Excel and Powerpoint files. You can also use its cloud features, allowing you access to your files from anywhere.

If you really want the full laptop experience, there’s desktop mode. You can activate it from the notification panel. Here, you can use multiple apps with their own windows, just like in a computer.

More on productivity, you can also grab the smart magnetic keyboard case and the M Pencil (both sold separately) to really open up and expand what you can do with the tablet.

The keyboard case sticks to the tablet using strong magnets. From there, you can adjust the angle of the tablet from two positions. The keyboard itself is fine for prolonged use. The tablet’s size allows for a more spacious layout than others with comparable screen.

The case also has an NFC sensor on the right switch key. If you have a compatible Huawei smartphones, you can tap it here to activate the multi-screen collaboration, which lets you to project your phone screen on the tablet.

The M Pencil is Huawei’s answer to the Apple Pencil. Huawei’s stylus has 4096 levels of pressure sensitivity that allows users to capture the nuances of handwritten notes and drawings.

It magnetically docks at the top and charges wirelessly. It can be used with the Nebo notes app, which comes pre-installed with the tablet. The M Pencil is rated for up to 10 hours of use.

Personally, I like the magnetic keyboard case more than the M Pencil, mainly because I can’t draw anymore and my handwriting sucks. But its a great accessory for those who like to draw and sketch.

For those thinking entertainment, the Matepad Pro’s gorgeous 2K AMOLED display and quad speakers make it a wonderful device for watching movies and videos. You can use YouTube web app on the browser, which runs fine or you can install an alternative app called YouTube Vanced or NewPipe.

As for Netflix, the service doesn’t officially support Huawei phones and tablets. You can, however, sideload the Netflix app. Any version below 5 will work. I have version 4.16.3 build 15172 installed (on both the tablet and the Huawei P40) for those curious.

The Matepad Pro comes with a large 7,250mAh battery, which will give you around two days of use.

A faster charger will ease (such as the one with the Huawei Matebook 15) will shorten the charging time to more manageable degree.

Verdict: It can replace your laptop but…

The Huawei Matepad Pro is a great tool for productivity and entertainment. It comes with a great build and nice set of features including a great display, quad Harman/Kardon speakers, and a long battery life.

As a viable laptop alternative, the Matepad Pro is compact and easy to carry around. Adding the magnetic keyboard (a must have accessory in my opinion) will greatly expand what you can do with it like creating and editing documents, as well as answering emails.

Of course, it can’t do all the things a laptop can do (graphics design and layout or creating brochures and posters come to mind). But for most of us, the tablet is more than enough to get things done.

The Huawei Matepad Pro is priced at PHP 32,990. It is now available in the Philippines.