The inclusion of the new HDMI 2.1 spec now enables next-gen console gaming with 4K resolution and faster 120Hz refresh rates for ultra-clear and ultra-smooth gaming performance. Taking it to the next level, MMD partnered with Xbox to tune these “Designed for Xbox” displays to deliver the optimal validated Xbox Series X performance from the moment you plug it in.

Not to be overlooked by Playstation fans, the Philips Momentum is also ideal in playing PS5 games using HDMI 2.1 technology to maximize the entertainment with 4K graphics and 120Hz refresh rates on PS5-exclusive titles.

Unlike televisions, Philips Momentum gaming monitors are built for console gaming, with low latency and low lag as priorities to provide a much smoother, more realistic gaming experience. The series’ low input lag is a great advantage when playing twitch-sensitive video games, allowing the input to register on the screen faster.

The flagship 55-inch Philips Momentum (559M1RYV) will include a specially designed speaker enclosure from the engineers at Bowers & Wilkins, the British loudspeaker company globally renowned for their innovative designs and sound engineering, that completes the experience.

The team has worked together to create Xbox Game Mode, which creates an exciting mode with specially tuned picture quality for Xbox. The monitors have been extensively tested, and validated by engineers at Microsoft and MMD to ensure perfect compatibility, while also meeting the high expectations that dedicated Xbox fans expect.

“At Xbox, we are always looking to give our fans’ choice in how, what, and where they play their favorite games. Today, we’re excited to announce our partnership with Philips to deliver the first Designed for Xbox monitor, giving fans a unique display with technology and features that provide the ultimate console gaming experience for Xbox Series X|S.” – Matt Kesselring, Director of Xbox Hardware Partnerships.

“Philips Momentum broke new ground in console gaming as the first monitor to achieve VESA DisplayHDR 1000 certification. We are thrilled that the Momentum console gaming monitors will deliver a new standard of audio-visual experience that will bring out the very best in your Xbox.” Chris Brown, Philips Monitors Global Product Marketing Lead. 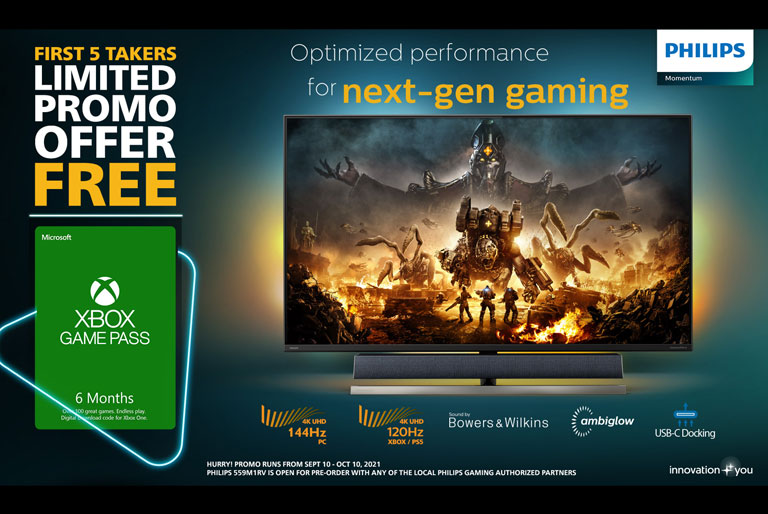