When Razer first introduced its gaming tablet concept, it was called Project Fiona.  Since then, the idea has undergone several revisions and the final product is now called Razer Edge.   Razer sought the help of the public to come up with the best possible gaming tablet, hence, the Edge is clearly a product of crowdsourcing. Razer took note of the public’s feedback which were posted on Facebook and Twitter.  The product is a cohesive gaming tablet with an array of features fit for PC gamers looking for a mobile platform. 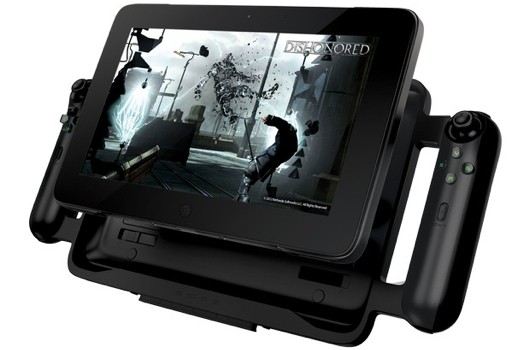 The Razer Edge is a Windows 8 tablet at its very basic configuration, but with a few specific attachments, it transforms into three other form factors.  The main attachments are the controllers which used to be fixed in the original design.  They are now detachable, which is better in my opinion since they look ridiculous if they are permanently fixed.  There is an optional keyboard dock which of course transforms the Edge to a notebook where you can connect a mouse for a desktop gaming setup.  There is also a docking station that transforms the Razer Edge into a home console.  In this format, you can connect the Edge to your home theatre system.  See how the Razer Edge looks with these attachments in the video below.