Android users should be familiar with Google Now, a search feature on Android devices that presents data in an eerily timely way by displaying cards that contain the information that users usually need.  Google Now lets users manage their day through the app’s features like showing the weather, reminders of events and appointments, relevant news, travel information, traffic information, flight details and others.  The first time I turned on Google Now on the Google Nexus, I was surprised at how much the app knew about me and my activities.  It was as if Google has been spying on me for quite some time.  But after the initial shock, I found the app to be quite helpful and quite interesting to use.

Now, iOS users no longer need to feel envious of Android users as Google Now is now available to them, although not all features are on the iOS version.  Google Now for iPhone and iPad is an update on the Google Search app, so you first need to download and install the search app on your iPhone and iPad and then update the same with Google Now features. 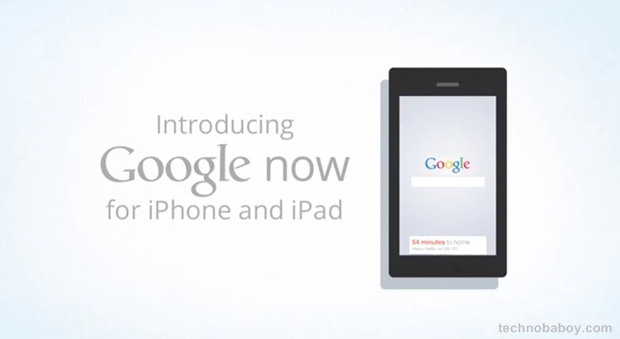 The overall look and feel is the same as the Android version, although admittedly, the iOS version looks and feels a little better, with the cards being presented in a view that resembles Cover Flow.  In terms of functions and features, however, the Android version is still better.  The iOS version does not allow interaction with the user like placing a call, drafting a text message or setting up of an alarm.  And unlike the Android version, Google Now for iOS does not speak.  The basic functions are still available, though, like giving users updates on the weather, traffic situations, news and reminders.  It also offers local information like events, restaurants and movies.

Google Now for iOS may never feel as complete as the Android counterpart, but it’s still good news to iOS users.