Sony unveiled a new Xperia handset called Xperia M.  It’s a mid-range Xperia phone with a fairly decent set of specs and hopefully, Sony matches this with a reasonable price once it hits the Philippine market.  The Sony Xperia M shares the same design language with other Xperia models but it is not as pretty as the Xperia Z or even the Xperia V.  It’s still unmistakably an Xperia, though, and is almost identical to the recently-announced Sony Xperia ZR.

The Xperia M runs Android 4.1 and will also be available in a dual-SIM variant which will be aptly called Xperia M Dual.  The hardware specs for the Sony Xperia M will not wow anyone but they are decent nonetheless.  The handset will feature a 4-inch FWVGA (854 x 480) display reinforced with scratch resistant glass and will be powered by a dual-core 1GHz Snapdragon S4 SoC (MSM8227) processor paired with 1GB of RAM.  That’s not too much but that’s sufficiently fast for most applications.  Internal storage is a paltry 4GB but thankfully it is expandable up to 64 GB via microSD slot. 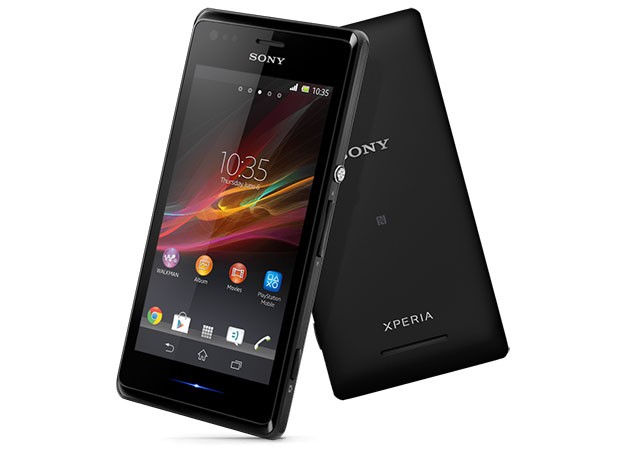 For shooters, you might find the 5-megapixel rear camera wanting but it has an Exmor RS sensor and companion flash so you can still expect decent shots.  There’s a front-facing camera but it’s only the VGA type.  For connectivity options, there’s Wi-Fi, NFC, HSPA+ and Bluetooth 4.0.   The Xperia M will be powered by a 1,750mAh battery.

The Xperia M and M Dual will be available in black, white, purple and yellow and will released during the third quarter of 2013.